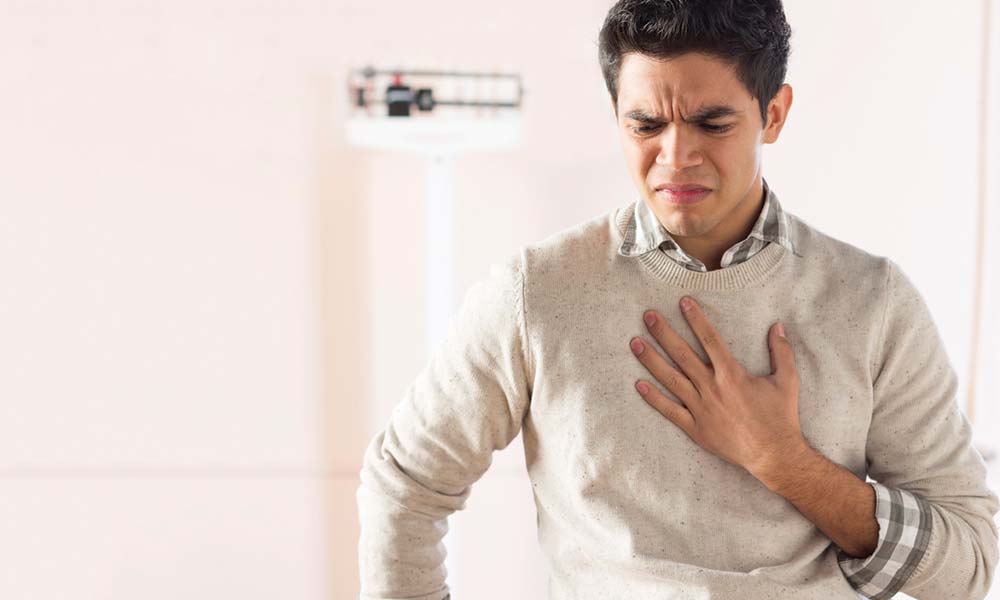 What is Barrett’s Esophagus?

Barrett’s esophagus typically has no specific symptoms of its own. However, most people with Barrett’s esophagus suffer from chronic acid reflux and heartburn caused by GERD. Symptoms of GERD include a sore throat or a burning feeling in the back of the throat, laryngitis, a chronic cough, and sometimes nausea.

If you experience frequent heartburn, it’s a good idea to make an appointment to talk with your doctor about your symptoms and what treatments are available. If you have difficulty swallowing, experience chest pain, vomit blood or have bloody, black or tarry stools, you should call your doctor right away or go to the nearest emergency medical facility. These symptoms can be signs of more serious complications or conditions and should be addressed right away.

What Are the Causes and Risk Factors?

Because Barrett’s esophagus is so closely associated with GERD, risk factors that aggravate  GERD are also considered risk factors for worsened Barrett’s esophagus. These include consuming alcohol as well as smoking. Eating habits such as eating large portions, consuming spicy foods, eating a diet high in saturated fat, as well as lying down or sleeping less than four hours after eating, can all aggravate GERD. Frequent use of over-the-counter painkillers such as Ibuprofen and Aspirin can also make GERD worse.

How is Barrett’s Esophagus Diagnosed?

Because of the potential risks, regular screening every six months is recommended for people who have multiple risk factors. Barrett’s esophagus can only be diagnosed with both an upper endoscopy and a biopsy of tissue from the esophagus.

An upper endoscopy is an in-office procedure performed by a gastroenterologist. The procedure is not painful, but a sedative is usually given to help ease any discomfort. The doctor will place an endoscope (a tube with a light and a small camera on the end) through your mouth and down your throat. This allows the doctor to see the inside of the esophagus and inspect the tissue for signs of disease. A healthy esophagus will have a whitish lining. The first indication of Barrett’s esophagus is a salmon pink-colored section of lining tissue near the bottom of the esophagus, where it joins the stomach. Your doctor may choose to also look at the stomach and duodenum (first section of the small intestine) during the same endoscopic exam.

A biopsy, or tissue sample, will also be taken. This tissue sample will be examined for proof of Barrett’s esophagus—the presence of abnormal tissue cells that resemble those of the intestines rather than those of the esophagus. The tissue sample will also be examined to see if any cancer or precancerous cells are present. If both the endoscopy and the biopsy indicate the presence of abnormal tissue cells, then a diagnosis of Barrett’s esophagus can be made.

The first line of treatment is aimed at reducing symptoms and is the same as treatment for GERD. This may involve medications such as over-the-counter antacids, and possibly more potent medications called H2 blockers. Complicated cases of GERD that require long-term treatment may require medications called proton pump inhibitors (PPI). PPIs include brand name medications such as Prilosec, Prevacid, or Nexium. These medications help by inhibiting the amount of acid that is secreted from the stomach. This reduction in stomach acid relieves symptoms of heartburn and damage to the esophageal tissue. However, symptoms typically return if the medication is stopped, so long-term safety is an important consideration. Even though medications are classified as over the counter, they are powerful drugs, long term use should be done under the supervision of a physician.

In addition to a variety of medication options, treatment for GERD will often include lifestyle changes, and sometimes surgery. Treatment for GERD reduces symptoms but doesn’t actually reduce the change in tissue that indicates Barrett’s esophagus, and it doesn’t decrease the risk of cancer.

The first two levels of dysplasia typically only require that you continue to treat the symptoms of GERD and prevent further damage to the esophagus. However, if high-grade dysplasia is found, more invasive procedures may be required, including surgical removal of portions of the esophagus. Radiofrequency ablation is another treatment option. Radiofrequency ablation is an endoscopic procedure that involves the use of heat to kill the abnormal cells. Cryotherapy also uses an endoscope but instead of heat, cold gas or liquid freezes the cells. Another alternative is called photodynamic therapy and uses a light-sensitive chemical and a laser to identify and kill abnormal cells.

If you suffer from symptoms of acid reflux or GERD, the most important thing you can do is to work with a gastroenterologist and maintain regular monitoring of your esophagus. This will allow complications including Barrett’s esophagus and the development of cancerous cells to be caught and treated early.

The doctors at Gastroenterology Consultants of Savannah are committed to helping patients achieve and maintain optimal gastrointestinal health. We would love to partner with you to address your health concerns. Contact us today.

← Leaky Gut: What It Is and How to Heal It Need to Know: Zantac Recall →